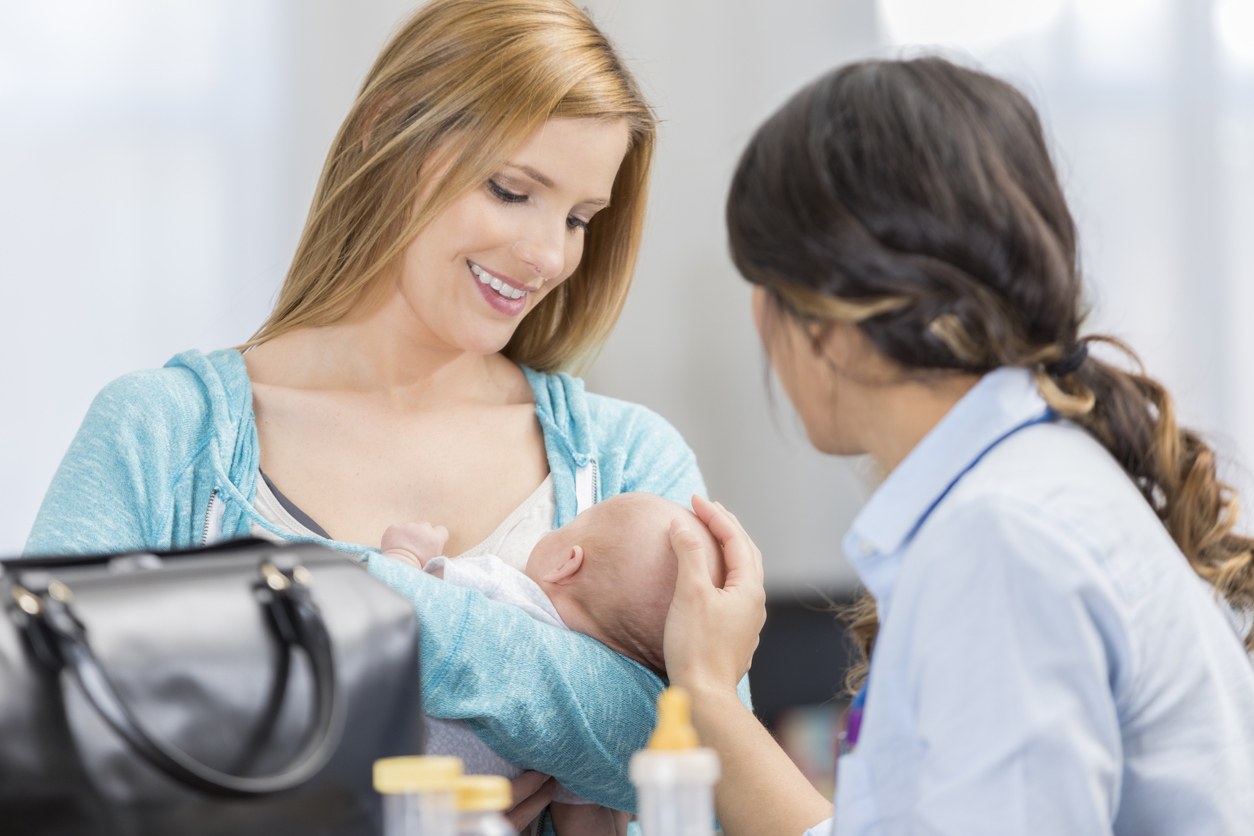 Life is funny! If you had told me when we married that we would have four children in about four years with twins in the middle, I would have laughed. If you had told me that I would eventually spend 10,000 plus hours serving families of twins, triplets, and quads, I would have laughed even harder. But if you then told me I would eventually write a book about multiple gestation, birth, postpartum, and breastfeeding that would be utilized in hospitals nationwide, I would have fallen in the floor laughing. Yet, all of that happened, plus, so much more. Beginning with our own children and throughout the 35 years of supporting expectant and new mothers, babies became my passion and ultimately my greatest teachers! 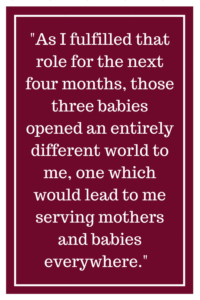 The first time a mother expecting multiples ever called my house requesting assistance, I wasn’t exactly sure what she wanted help with. Expecting triplets in a few months, she said she had heard that I loved babies and had breastfed twins. For a moment, I thought she wanted me to help her breastfeed her triplets, and while I loved nursing our own children, I thought it might be a bit more of a challenge to become a wet nurse and still care for our own family. Not too far into the conversation, I realized she would be doing the breastfeeding, but wanted me to be a guide by her side, giving her the support and instructions she needed to be successful. As I fulfilled that role for the next four months, those three babies opened an entirely different world to me, one which would lead to me serving mothers and babies everywhere. When I later became a clinical nursing instructor, I adopted the same method, the guide by the side of my students, as my primary teaching method.

Though I am a registered nurse and International Board-Certified Lactation Consultant (IBCLC), this month’s breastfeeding (BF) hacks are not meant to be clinical guidelines with references for each entry, although I have created such for professionals. Instead, these are written in lay-women’s terms, written specifically for the expectant or breastfeeding mother, hoping in this way, I can also be the guide by your side. Enjoy! 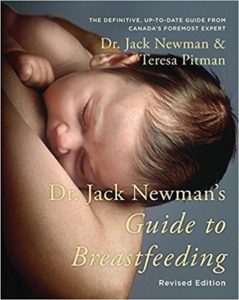 BF Fact#1: Babies are People Too!

As humans, when we are thirsty, we normally raise a cup to our mouth and lift our chin to drink. Many authorities suggest that babies likewise learn to breastfeed in a similar way and hence recommend a chin-led latch. Dr. Jack Newman, a Canadian pediatrician and authority in this field, has been a strong supporter of breastfeeding for decades.

BF Hack#1: Read his common-sense book in which he empowers parents who want to know the basics without the fluff, including the hows and whys behind the chin-led latch.

BF Fact#2: Babies Only Have One Stomach 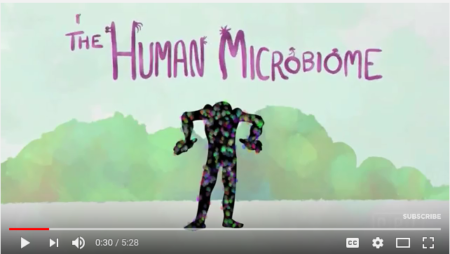 On the other hand, breast milk is more than just the perfect food for the newborn, it also enhances the development of the infant’s microbiome. In the process, the breast milk also feeds the healthy bacteria in the baby’s body and builds their immune system.

BF Hack#2: Inform yourself about this relationship by watching the excellent video created by the National Public Radio (NPR).

Did you ever play with a baby doll that had a magic baby bottle? With those bottles, when it was tilted, the milk would magically disappear, as if the baby doll was drinking it. Afterwards, when you set it on the table, the milk reappeared. Do you know that is exactly how the breasts work? 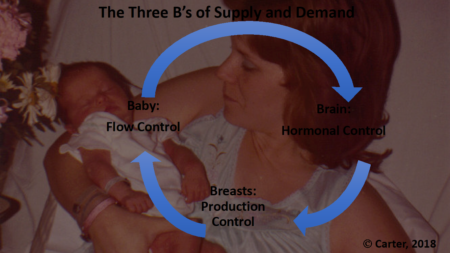 When a supplement is given to a breastfed baby, the mother’s hormonal system has no way of knowing that the baby took in that amount. Therefore, just one bottle of supplement can start a downward spiral of ultimately reducing the mother’s milk supply.

BF Hack#3: If you choose to give your baby a supplemental bottle, remember to use a breast pump for 15-20 minutes to provide the hormonal stimulation to protect your supply.

Did you know that the mother’s body starts to create a special high-powered milk during the late pregnancy, preparing for the day of birth called colostrum? Did you know if a baby arrives early, the mother will make a special preterm milk to meet that baby’s needs? Did you know that a mother’s colostrum smells, and probably tastes, like the amniotic fluid that baby has been swimming in for months? Did you know that a newborn recognizes his own mother’s smell? According to one research study, when a newborn is laid on their back in a crib and a breast pad from their own mother is placed to the right of the baby’s face and a different mother’s breast pad is placed to the left of the baby’s face, that the newborn will NEVER turn toward the stranger’s breast pad. Plus, there are amazing benefits to breast milk, starting with that very first milk, colostrum, for both mother and baby. 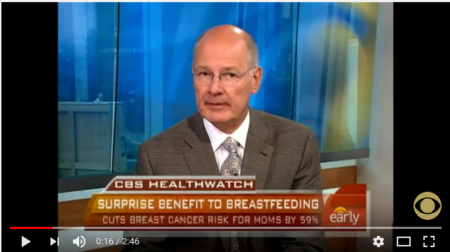 BF Hack#4: Locate the book,Your Amazing Newborn, and learn about some of the other inborn characteristics and capabilities your baby has in the early weeks. I would also encourage you to watch this short video created by CBS HealthWatch about the benefits.

Do you remember when you learned to skip count by fives? Did you know that simple trick can help you remember the approximate amount that a baby’s tummy should hold per day of life over the first week? At birth, a baby’s tummy is about the size of a small marble or cherry, then each day it stretches. Did you know that with first-time mommies, their milk supply each feeding per day of life and the baby’s tummy capacity mimic one another? 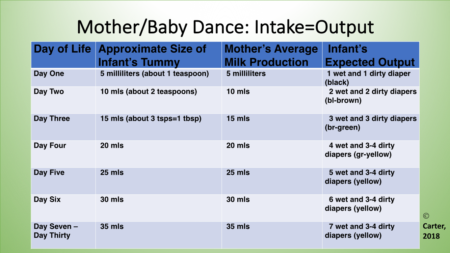 As a labor and delivery nurse, if I hung four bags of intravenous (IV) fluid and ran that through your veins while you were in labor, I would then report to the postpartum nurse that 4,000 milliliters had been given. Then, over the next several hours, the postpartum nurse would expect to see your body process that fluid through your veins, then the kidneys and eventually come out of your bladder. So, what goes in would be expected to come out, because your body balances itself so that intake should always equal output. The same is true for your baby. Whatever fluid the baby takes in will come out the other end. Since all newborns come with the heavy black meconium stools already in their gut at birth, the laxative properties within colostrum help to push that out. And the more colostrum the baby drinks per feeding, the more output of both wet and dirty diapers that the baby will have. So, it is easy to see if the baby is effectively transferring milk at the breast by watching their output.

I have many more BF hacks to describe, but those will have to wait for another article. Enjoy your little ones and you will be surprised in a few years what they will have taught you!

Let’s Agree Not to Excuse Our Way Out of the Life We Want, OK?

Just Because You’re Depressed, Doesn’t Mean You Have Depression

Knowledge is POWER: Why Sleep and Exercise Impact Your Health