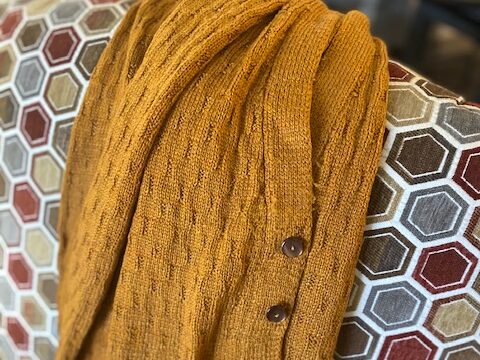 My dad has a gold cardigan sweater that his mother knitted for him many, many years ago. Sewn inside the collar is a tag that reads: “Made Especially for You by Helen Tucker.”  I remember him wearing that sweater during my childhood! It held up beautifully until just a few years ago when one of the sleeves began to unravel at the elbow, leaving a large hole. I brought it home, telling him I would try to mend it, but it is beyond repair (and I don’t knit). I hated to take it, as it has given him such comfort through these years with Alzheimer’s. He has other sweaters, but that was his favorite. He wore it frequently, proudly sharing the fact that his mother had made it for him. Beaming, he would show us the tag and say, “Whenever I wear this, I feel my mother’s love around me.” What a gift. Even as his memory crumbled, the feeling of her love remained, wrapped around him like a hug each time he put on the sweater. It seemed to give him a sense of security as he faced growing confusion and anxiety.

My dad’s Alzheimer’s journey has been a steady decline with many twists and turns, but this year has been an unraveling. After four years in an assisted living facility, he took a sharp turn for the worse and slipped into the late stage of the disease. It was like finding the gaping hole in his sweater after years of wear and loose threads. As he began tumbling downward, I moved quickly to bring in reinforcements through hospice and a move to memory care. That gave him a soft and solid place to land, and he began to regain his composure. There are more arms around him now, helping and holding him throughout the day. He is frail and disoriented, but still smiling. His face lights up when I enter, and he mostly knows who I am, but will say, “You’re Elisa, right?” One day while I was there, a caregiver told me that he had said to her, “You look like you need a hug.” I smiled. “That sounds like my dad.” She said, “You mean giving hugs or knowing when someone needs one?” I said, “Both.”  He hasn’t lost that loving spirit, the golden thread that connects with people.

Hugs are woven into the Tucker family legacy. When I was growing up, I would come downstairs each morning to find my dad with a big smile and open arms. He’d say, “It’s time for a Daddy Hug!” One of the hardest parts of the pandemic was being unable to hug each other. His senior living community was locked down for 7 months, and we were only able to have window visits. Finally, I was able to go in as his “essential caregiver” by following the same protocol as their staff and visit him in his room. Wearing a mask and gloves, I could hug him once again. Sigh.

Hugs are one expression of the legacy of love that was passed down from my grandparents and my own parents. Other ways that love was shown were through listening, enthusiasm, acceptance, and joy. My dad often quoted his mother as saying, “It’ll all work out,” even when we were going through difficult and anxious times. It has amazed me to see how this attitude has accompanied him on this Alzheimer’s journey. Here again, his mother’s optimism and encouragement showed up and bolstered his resilience and mine. He has always had a deep and abiding faith in God, in Love, and in life. It is expressed through his cheerful, adaptable nature and his generosity of spirit. He is living his parents’ legacy while creating his own.

I’m holding onto the gold sweater for now, as a tangible piece of my grandmother’s legacy and my dad’s life. I have often felt like my role as his caregiver is like that sweater – it’s about how I make him feel. I can be present with him and remind him that he is loved and cherished. I can hold his hand, giving reassurance and support. At times when he is particularly confused or agitated, I put my hands on his arms, like slipping them into the sleeves of his sweater, and say calmly, “Dad, look at me.” I get him to stop and focus, then I say, “Dad, I love you. I am here for you no matter what. It’s going to be okay.” He may not remember what was said, but he remembers feelings. He knows love.

My dad has always spoken of “the bond of Love that holds us together.” It is a living legacy that is revealed and reinforced in our relationships, from one generation to the next. This love is like a golden garment that we wear and share, and a reflection of the ageless spirit within us. 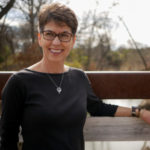 Elisa Juarez is a writer, blogger, and foodie. Her first book, Soul Salsa – Learning to Savor Every Season, was released in August (2020). It grew out of her blog, Spoonful of Salsa (www.spoonfulofsalsa.com) which is an expression of her passions for writing, cooking, and healthy living. Her motto is “Live well, eat well, be well,” which connects to her mission: to uplift and empower women through wellness, creativity, and self-discovery. She has led workshops for women and served as women’s ministry leader at her church. Elisa has a B.A. in Psychology and a Master’s degree in Social Work, plus over 30 years of informal education in nutrition, wellness, and personal/spiritual development. Her work experience includes counseling, community education, volunteer coordinating, recruiting, marketing, and retail management. In addition to writing, Elisa enjoys reading, cooking, yoga, meeting new people, wine-tasting, and doing crossword and jigsaw puzzles. She and her husband, Art, are happily married and live in Mansfield, TX. They have two grown daughters who are also avid writers and cooks.