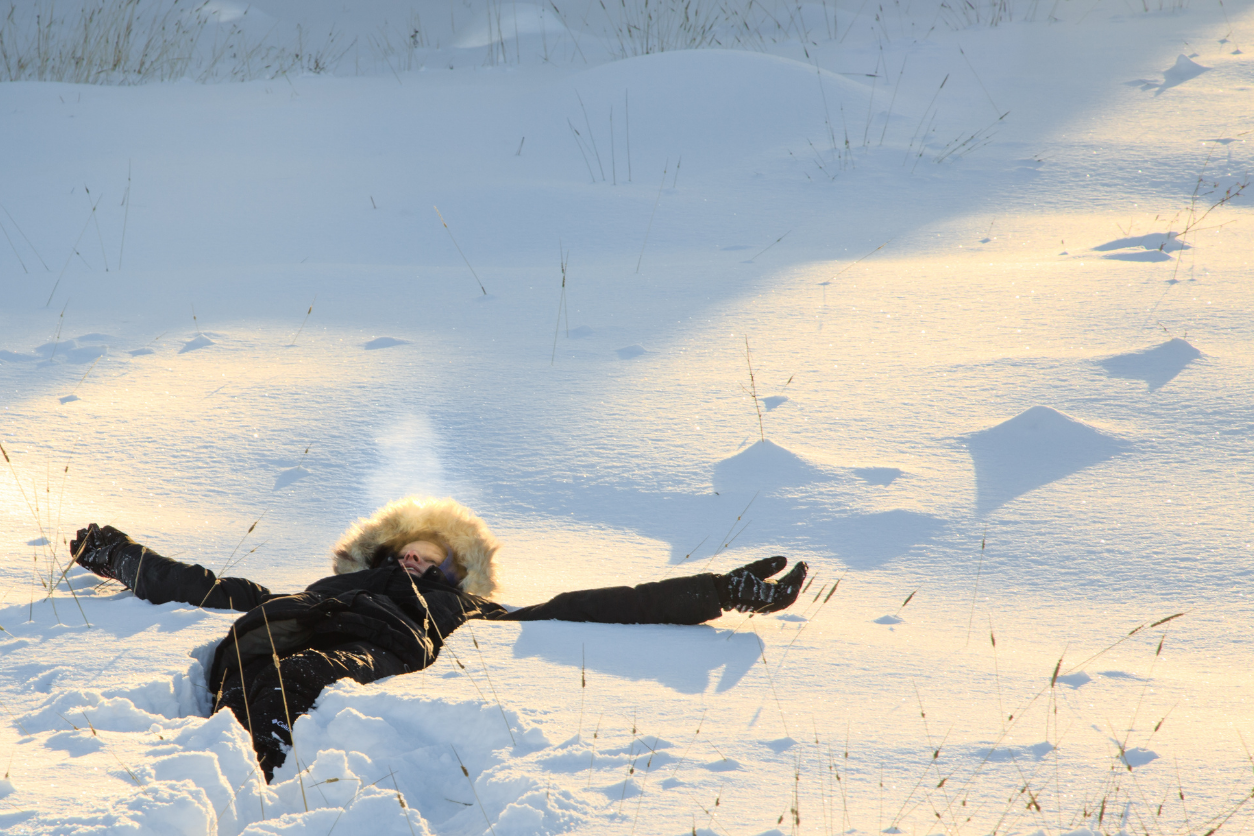 I fell on the ice this week, Dear Reader.

My legs went out from under me so fast that I had no time for even a conscious thought of “oh crap!” before my body hit the ground.

It was, therefore, a total shock to find myself laying on my back, legs sprawled beneath my Jeep, head mere inches from the metal post that holds the basketball net that flutters above our driveway.

Slowly, the reality of what had happened hit me.

I remembered that I screamed as I fell.

I wondered if the neighbors had heard me.

Briefly it occurred to me that the guy shoveling snow next door may come to help me. (He didn’t.) (Maybe I hadn’t screamed that loud?!?)

And then I just lay back in the snow, resigned to the fact that I was on the ground so I may as well lay my head back.

It made sense, then, to also close my eyes.

And to release the massive breath that I didn’t even know I was holding.

I kind of wanted to lay there forever. (Despite the fact that it was minus 15 degrees Celsius.) (The sun was at least shining.)

But then my daughter came ‘round the far side of the Jeep, wondering if I was okay.

And I realized with a start that I simply could not lay there forever, despite the sun on my face, and the cushiony softness of the snow beneath my head that felt mesmerizingly like a pillow of fluff.

And that’s when the panic set it.

You see, I have shoulder problems and neck problems and back problems and knee problems and so many bloody problems for which I still blame a brutal car crash some 13 years ago (almost to the day, interestingly) and I suddenly had no idea if I would actually be able to get up.

Did this fall on the ice cause me further injury?

Bloody hell. (Pretty sure I said that out loud but it may have been followed by an f-word or two.)

Now I was mad.

Mad at my husband – why hadn’t he put salt on the damn driveway?!?

Mad at myself – why didn’t I have on my good boots with the excellent tread?!?

Mad at Mother Nature – why in the holy H-E-double-hockey-sticks was it so freakin’ cold and what was with all the #$&#&* ICE?!?

Oh, I was mad as I strode (back bent, legs wobbly) to the door to meet my husband who had actually heard my scream (I guess it really was loud enough) and had come to see what had happened.

And then I went back round the Jeep, climbed in without incident, and drove away.

I was really mad.

Until I wasn’t anymore. (It took about a block.)

And that’s when I cried.

And somewhere in between my snuffling and blubbering I recognized that here I was, once again, living through the stages of what happens to us all after a shock of any kind, and I was in that moment precisely in the sadness. (With a bit of bargaining tossed in for good measure: “What if I had just worn better boots?!?”)

And as I drove and blubbered and had this recognition all at once it also occurred to me that we Humans have been through a lot lately.

And that in any given moment, each and every one of us has been precisely in one of the stages of grief, whether we realized it or not.

And that really, all I had wanted throughout the entire process of my fall on the stupid ice was this:

I wanted Someone to ask me if I was okay.

I wanted Someone to acknowledge that what had happened really sucked.

And I wanted Someone to ask if there was anything they could do to help me (even if there wasn’t.)

Sometimes there are Others around us who can indeed rise to the challenge and give that type of support.

And other times, the Others around us are not capable of it (for various reasons) and we have to do it for ourselves.

We have to ask Ourselves if we are okay.

We have to tell Ourselves that what has happened to us really sucked, and that we’re sorry we had to go through it.

And we have to ask Ourselves if there is anything we can do to help Ourselves, anything at all.

And then we have to do it.

And so it was that I cried as I dug in the glove compartment for my trusty homeopathic remedies because my body knew it needed help to heal from the trauma of the fall.

And so it was that I drove myself 45 minutes to get a peppermint hot chocolate, because my soul needed the comfort of that particular warm drink.

And so it was that I took myself for a long walk later in the day, despite my fear of falling again, because my mind wanted me to move, to “get back on the horse,” as it were.

And so it is today that I am writing about it, because my entire being needed me to release the story into the world, its containment serving no one.

And so, it is now that, having done these things for myself, I can now be the Other for you, Dear Reader.

I can be the Someone who asks if you are okay.

I can be the Someone to acknowledge alongside you that whatever has happened to you, whatever traumas you’ve endured or hurts you have suffered or pains you have felt, have, indeed, sucked. Period. Full stop.

And I can be the Someone who asks what you need, if there is anything I can do to help.

It’s an honor to be Another’s Someone, Dear Reader.

I am not always capable of it (for various reasons). But when I can be, it’s an honor like no other.

And so let us strive, Dear Readers, to be the Someone that we need for Ourselves (should the Others around us not be capable of it, for various reasons) such that we can be a Someone to Another.

Doesn’t it just make your heart full to imagine a world of us simply being Someones to Anothers?

And my, what a world it will be.

The Possibility in Uncertainty

The Adams Story: Young Girls with a Vision for a Better World