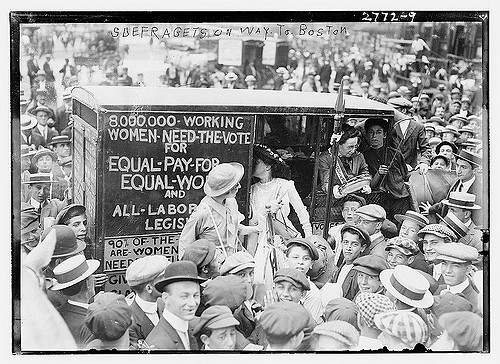 The social splintering of the US population along economic, racial, and ethnic lines has made us keenly aware of our villages – the groups to which we belong – and will certainly prompt significant realignment. We women will need to make decisions.  Will we ally with other vulnerable groups, or will we pursue a purely feminist agenda that avoids such entanglement?

Although women constitute the majority — 51% — of the US population, politically speaking women are unequivocally an “out group.”  Our participation in politics began only when the dominant group (men) finally granted us the right to vote and run for office.  Although we fought long and hard for suffrage, at the end of the day, we had to ask for the right to vote; we had to supplicate.  A century later, we still do not have parity. Women lag economically, earning just 79 cents for each dollar earned by a man, all while carrying the burden of unpaid work (childcare, housework, and eldercare).  Women also lag politically; in Congress, just 107 (or 20%) of our 535 legislators are women.

Women, more than half of the US population, should not have to struggle this hard!  But, manifestly, our numbers do not translate directly into votes and political power. Dollars do that, and women, as just noted, lack dollars.

Statistics concerning personal wealth (as opposed to earnings) reveal a much greater economic divide – not only between men and women, but also between different segments of the female population.  Personal wealth is defined as assets minus debts.  In 2017 Americans collectively owned $95 trillion in personal wealth, with the lion’s share owned by white men.  White women owned only 36 cents for each dollar owned by white men, meaning that they controlled $0.36 of each $1.36 – about 25% of America’s private wealth.  Allowing for the fact that minority women control a vastly smaller portion of this wealth, a rough estimate spreads $23 trillion of personal wealth across 118 million white women, for an average personal wealth of $195,000 per woman. (Of course, a very small number of extremely wealthy women skew these data; median wealth of white women is certainly lower.)

At the other end of the spectrum, single African-American women have an average personal worth of $200, and single Latina women, just $100.  If those single women are single mothers, the figures drop to $0 and $50 respectively.  (Needless to say, a medical bill or a car breakdown will completely undo such a woman, leading to spiraling credit card debt and predatory payday loans.)

These vast differences in wealth weaken women relative to men and also alienate women from each other, reinforcing the partitions of race and ethnicity.  Rather than voting as a bloc, women dilute their political power by voting along class and culture lines.  Wealthy women vote to preserve their wealth, minority women vote to relieve poverty (if they vote at all), and rural women vote to make America great again.  If dividing and conquering is the best way to weaken a constituency, women go to the polls already neutralized.

This political fragmentation reflects the tangled loyalties that most women experience at an individual level.  A woman may belong to a dominant group as well as her female “out group.”  She may be affluent and female, for example, or highly educated and female.  Alternatively, she may belong to two out groups and feel more solidarity with her ethnic, racial, or religious group than with women.  She may even conceal mistreatment of women in her community to avoid shaming it.

If the distribution of women across in and out groups attenuates women’s power, the distribution of women across families weakens it even more.  Nature situates each woman among brothers, husbands, fathers, and in-laws.  No other out group is so atomized — except members of the LGBTQ community. In fighting for women’s equality, a woman risks antagonizing the only individuals who can help her in times of trouble. For reasons of self-preservation, she is more likely to align with her men on ethnic, racial, and religious issues than to challenge them on women’s rights.

In short, women are economically and culturally Balkanized, with competing loyalties complicating any commitment to feminism.  This circumstance strongly favors the status quo.  It also clarifies the path forward. I believe that we women can progress only if we lock arms with other out groups — with other villages.  Interdependence and a sense of common destiny will save us, but it means reaching across barriers of class, race, religion, and sexual orientation to secure a better future for everyone.  We must step out of our isolation to embrace other women — hotel maids, home health providers, fast food workers, and bus drivers.  We also must stand with dreamers, incarcerated black men, Native Americans, and the LGBTQ community. 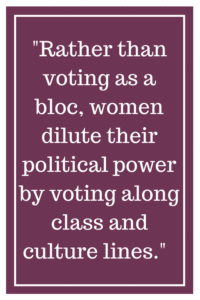 Can we bring ourselves to do this?

I’m encouraged that the Time’s Up Legal Defense Fund, created by Hollywood women, has crossed class boundaries to help women at Walmart and McDonald’s file lawsuits for sexual harassment. These women are too vulnerable to speak out without financial and social support.  If we can continue doing this, with Time’s Up leading to a larger movement for gender, racial, and economic justice, then we stand a chance.

In the Latino community, leaders like Julian Castro, former mayor of San Antonio and former Secretary of Housing and Urban Development, champion LGBTQ rights and the advancement of all minorities through improved public services.  His brother Joaquin, Congressman from Texas, does the same.

Lastly, here in the DFW metroplex, an increasing number of alarmed Muslim-Americans have stepped into the social justice arena, with some seeking public office and others providing social services — IT classes for the unemployed, food for the homeless, hurricane relief, and free medical care. The Muslim-American community in DFW also has supported my own organization, the Gendercide Awareness Project, in securing rights and education for women around the world.

As leaders from these various villages invite women to join them, some women will demur. But many others, myself included, will join ranks.  I now identify my village differently than I did in the past. It’s not constituted of people who look like me, nor of people who live in my zip code.  My villagers are people who think and feel like me – people who embrace the high ideals of our Constitution, people who feel responsible for others, people who desire justice and prosperity for all.

Recent events have shaken women from complacency and a false sense of security, reminding us that we are still an out group, and a fragmented one at that. We are neither strong enough nor unified enough to go solo; if we isolate ourselves, we risk seeing our priorities, our access to wealth, and our access to power further diminished. We must work with other out groups to secure our collective future, knowing that women’s progress is inextricably linked to theirs.

What It Means To Be A Christian Today

Hugs and Kisses: A CPA’s Perspective on $$

A Financial Plan Is More Than Investments